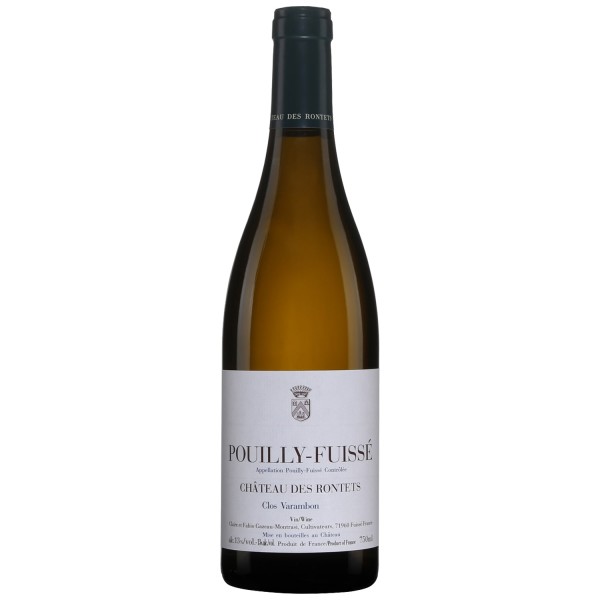 Château des Rontets has been owned by the Gazeau-Varambon family since 1850 and is located on top of a hill overlooking the village of Fuissé. All the vines, except for one plot (Pierrefolle), surround the house in a clos. Fabio Montrasi was born in Milano where he met his wife Claire Gazeau and where the two worked, for a number of years, as architects before deciding to exchange a city life for a farmer's existence. They moved back to Claire's familial home and began work on the vineyards, slowly returning the soil to its natural state. The terroir at Rontets is comprised of a mixture of clay and limestone with fairly pebbly subsoil which favors good drainage.

The property is 6.5 hectares. The oldest vines were planted in 1910 and 1920. These vines go into the tête de cuvée "Les Birbettes". The rest of the vines in the clos were planted between 1945 and 2000 and make up the Clos Varambon every year. Pierrefolle is 500 meters away on an opposing hillside where the vines average 35 years old. Since 1996, a additional hectare has been planted with Massale selection (no clones). Organic agriculture was practiced from the first day Claire and Fabio took control of the château to protect the variety and diversity of the ecological system. The couple's first aim is to produce grapes of the highest quality. Harvest is done by hand and the bunches are placed into small cases in order to respect the integrity of the fruit.

Alcoholic fermentation takes place only with natural yeasts in temperature controlled 30 hl oak vats and barrels. Maturation on fine lees takes place in oak barrels and vats, with ageing periods ranging from 10 to 24 months depending on the cuvee. The wine is fined with bentonite only when needed, and only the Clos Varambon sees a light Kieselguhr filtration before bottling. After a long ageing on lees and a few attentive rackings, the two other cuvees gain a stability level high enough to be bottled without any filtration.

“The Clos Varambon is a wine conceived to be appreciated from its early age: this is why we vinify it mainly in large volume containers and without new oak, in order have all the advantages of oak while keeping a more immediate and direct expression of the fruit. Depending on vintages, this cuvée can easily age from 6 to 10 years: as time goes by, the aromatic palette will evolve from white flowers and fresh fruits to an evocation of dry fruits, beeswax and spices.” Winemaker’s Notes

The label for this special edition was photographed by Spencer Tunick in support of reports of climate change and Greenpeace.